Skip to content
So today we decided to go on an Iban Boat tour (if you don’t know who the Ibans are then make sure you check out my post on that!) and I found it really good so I though why don’t write about it! So first I am going to talk about the boat and then what we saw and finally my opinion on it!
The boat that we went on was an Iban Longboat and it was made out of Iron wood! The boat was very close to the water and this was because the Ibans would use it to fish so it would be easier to bring the nets in or to put the fish in the boat. The boat also has seats all around the edge to give the men an Advantage point on the fish and even sometimes the family may come with him. At the moment the Ibans are using gas motors but back in the day they would use trusty ores. They say that the ores are more reliable but the motors take them places faster! You could choose from the Traditional Malay Boat (Malaysian), the Iban Longboat and last but not least the Orang Ulu boat. We chose the Iban and I was happy I chose that one. Mum let me choose the one that I wanted! Finally on our boat we had a petrol powered engine that was very faulty haha.
We got on our boat and the sky was clear and it was a sunny day. The driver was Malay (a local) and he just had to steer with a pole and also keep on top of the engine (not literally!) he seemed like he did it every day and I guessed he did. It took him a while to get the engine going he was pulling this wire up – like you do with a lawn mower – and finally brrrr it started working. It was really loud though! We set off passing the giant gold building across the road from us and we had a great view over town. The first thing we saw was Fort Margherita and it was white it stated a word on the front in silver writing. The view was amazing; we could see Mt. Santubong , which was the Mt. that we stayed right next to when we were at Damai Puri, which I could always see an old lady’s face in. The next thing we saw was a mosque, which was pink with gold domes on the roof, it was really pretty! There was a set of posters on the roof of the boat that told you what all the building were and I found that really helpful because I now knew what I was looking at. Did you know that the two parts of Kuching city (Malaysian Part on the South, Chinese on the North) are separated by the Sarawak River – the one we are touring. Next we saw the North Side of Towns City Hall – yes they have two city halls! We started to turn around because me and my mum were both confused because we thought it was one hour and It had only been half an hour. Then we thought he might take us the other way this time. That was what he did. We got to the dock and he kept going but then… the engine stopped he jumped of his feet and started to tamper with it and then brrr it was back on within a minute. We were off! We were thinking of going to the cinema later on but we didn’t know where the shopping centre that it was in was. We knew that it was called the Riverside Cinema Complex and then poof it was there it was only a couple of minutes down the street! We continued going until we saw a traditional Malaysia fisherman village. All the houses where on stilts and the all had fishing boats outside of them. We were still going and we saw on the Chinese side all the big houses and designer shops and then we looked on the Malay side and we saw shacks on stilts. It is crazy how literally 500 metres away from the Gucci shops there are Shacks! We continued to travel down the river in our little boat and we started to notice how much plastic and rubbish was floating in the water. It is truly devastating to see countries this beautiful full of rubbish! The next thing we saw was a bunch of fisherman boats and they were all pretty scrape but they were very big indeed! Some had big holes in the hull so they must have been abandoned or you never know they may still be out to sea (or river). We started to turn around and we started to head back we were going as fast as we could go, which was quite slow! Once we had to stop to put the engine on. I noticed that it was starting to drizzle and fast it turned into a storm luckily we had packed ponchos! We put them on and by the time we got off the boat it was hammering it down! 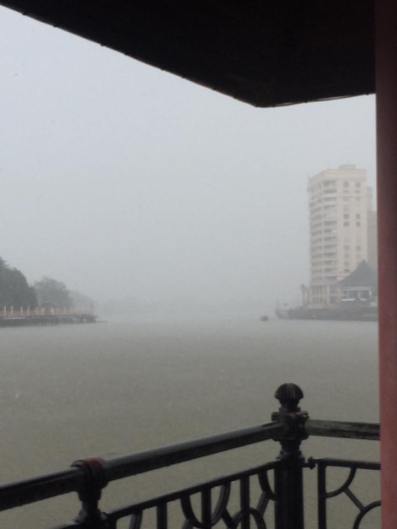 I really enjoyed the boat tour I felt as if I had seen a bit more of Kuching and what was around us! I hope you guys also learnt about what was around Kuching in todays Post and if you did then PLEASE SMASH THAT LIKE BUTTON and if you are new around here DON’T FORGET TO FOLLOW MY BLOG and step into my life!
Peace